Yet another CLRV and more 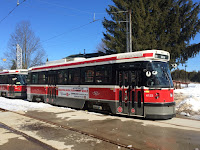 I'm a little late with this update, but last month Richard Schauer sent me a photo of yet another TTC that has made it to a museum. Car 4133, shown above, is currently stored at the Halton County Radial Railway but - like car 4068 - it is owned by the Seashore Trolley Museum. Unlike car 4068, though, this one isn't slated for long-term preservation. Instead the plan is to scrap it for parts, chiefly its trucks, which will be regauged to standard gauge and placed underneath car 4068. That's the plan but until that happens the car is still owned by a museum so it's on the PNAERC list for now.

Thanks also go to Al Weber with the National Museum of Transportation, who sent along several helpful pieces of mechanical information about cars in their collection. Tidbits like the type of controller on work car 165, air compressors on SLPS 1005 and IT 1575, and the brake schedule on the bi-polar are now part of the roster. Information like this is always greatly appreciated. I'm always looking to add any missing information, especially technical information on mechanical and electrical equipment. If you notice that cars at your museum have blank spaces in their listings, YOU can help! Just email me any information you are able to find.
Posted by Frank Hicks at 10:45 PM No comments: 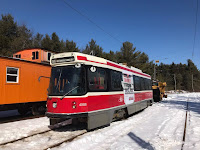 The Seashore Trolley Museum has announced that it has acquired a CLRV from Toronto. TTC 4068 is a standard production car and the fifth CLRV preserved thus far. It is pictured above in a photo by Tom Twigge from the Seashore Facebook page.

The car is not in Kennebunkport, however. It has been moved to the Halton County Radial Railway - where three of the other four preserved CLRVs are located - for interim storage. The timeline is not set, but Seashore plans to regauge their car to standard in similar fashion to the Illinois Railway Museum with its CLRV. For the time being, in keeping with PNAERC practice and to make it easier to track, car 4068 is listed with Halton County's collection with a notation that it is owned by Seashore. The CLRV is the first piece of electric equipment acquired by Seashore since CTA 1 in 2016.
Posted by Frank Hicks at 11:45 PM No comments:

My thanks go out to Les Beckman, who forwarded along this link to a photo whose caption suggests that one of my mysteries has been solved. New Orleans Sewerage & Water Board 50, shown above in a photo from Wikipedia (though a different locomotive than the one in the RRPictureArchives link), has apparently been scrapped by the City of Gretna - and probably about a decade ago at this point. The diminutive four-wheel locomotive was built by Baldwin-Westinghouse in 1907 and was used by NOS&WB until about 1959. In recent decades it had been plinthed in Mel Ott Park in the city of Gretna, but as can be seen its condition had deteriorated badly. Around 2010 it disappeared from the park, as shown by Google Street View images, and it now appears that it was cut up. This was one of the pieces of equipment for which I'd been seeking information, so this is one mystery solved at least.

NOS&WB 50 was the last of these little four-wheel industrial electric boxcabs that I know of that was built by Baldwin-Westinghouse, but a few pretty similar locomotives built by GE still survive. The most original are probably Abendroth Foundry "Amy" at Branford and Singer 1, currently in private ownership.
Posted by Frank Hicks at 8:24 AM No comments:

Email ThisBlogThis!Share to TwitterShare to FacebookShare to Pinterest
Labels: Removals 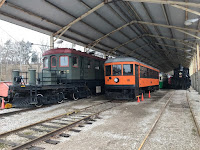 I had a chance to visit the ersatz Museum of Transportation in Kirkwood, Missouri last week and came away with a couple of updates. First of all, I say "ersatz" because it's no longer known as the Museum of Transportation. Back under private management after a three-decade period under the authority of St. Louis County, the museum is now known as the National Museum of Transportation. Their website and logo actually list this as TNMOT, so apparently they've got either an Ohio State alum or a fan of Wisconsin interurban lines in their management, but regardless the name of the organization has been updated on the PNAERC list (albeit sans leading T). I also got to view progress on Kansas City Public Service 1533, a Birney which is undergoing a major rebuilding effort including a lot of steel replacement.

The big news, though, was that a new acquisition was en route and has since arrived. San Francisco Municipal Railway 1140, a PCC built in 1946 as St. Louis Public Service 1711, was offered for sale by Muni recently along with a collection of other PCC cars that had been in dead storage for years. This particular car ran in St. Louis until 1957, when it went to San Francisco and operated (I think) until about 1981. Muni stored it until 1994 when it was sold to an individual in Lodi, California. In 2003 it was bought back by Muni and has been in storage since. It still wears its old Muni "wings" livery but doesn't seem to have suffered the vandalism and deterioration that some of the cars in storage did. NMOT didn't acquire the car for permanent preservation, but as a parts source for their identical car 1743. However plans for car 1140 are not final and the museum may hold onto it, at least for a while.

As for the other PCC cars put up for sale by Muni, I haven't seen anything about disposition. The folks in St. Louis said that 1140 was the only car in the bunch that wasn't being scrapped but I don't know whether this is confirmed.
Posted by Frank Hicks at 6:41 PM No comments:

Email ThisBlogThis!Share to TwitterShare to FacebookShare to Pinterest
Labels: Museum of Transportation, Transfers

LRVs for sale, get your LRVs right here 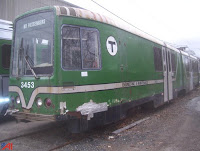 This link just came to my attention noting that the Massachusetts Bay Transit Authority is selling a group of junk light rail cars. Among the group are the last three Boeing-Vertol LRVs left on MBTA property. All three are listed on PNAERC because for quite some time I've made a practice of including pieces of equipment that were of obviously historic nature, even if that equipment was still in work service. In many cases this just means that equipment is on PNAERC for some time before it makes its way to a museum, but in this case the cars may just end up being taken off the list due to scrapping before they ever make it into formal preservation. 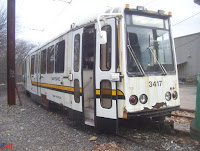 The three LRVs, all built by Boeing-Vertol in 1976, consist of three cars converted for various types of work service during the 1990s when the LRVs as a class were being retired from passenger service. Two of them, car 3453 pictured at the top and car 3417 pictured above, are significant (to a point) in that they're the last Boeing LRVs in existence with their original plug doors. These doors were notorious for their complexity and unreliability and many of the T's LRVs - as well as all of San Francisco's LRVs - were rebuilt with far simpler folding doors. The only formally preserved Boston LRV, car 3424 at Seashore, was rehabbed with folding doors. My notes suggest that at one point Seashore was considering acquiring one of these cars to represent the type's original configuration but I do not believe that is still the case, considering the internal alterations that were made when these cars were converted to work service and their current poor condition. 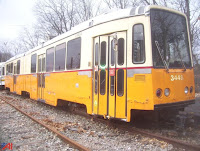 And the third car is car 3448, which at some point in the 1990s (I think) was painted in traditional Boston Elevated Railway orange and cream. While the photos on the auction site suggest this car appears to be in slightly better condition than the other two, it still looks awfully rough.

Though it's possible someone may want one of them, it seems unlikely and I would surmise that before too long these three LRVs will be gone. That will make car 3424 the only remaining Boston LRV and reduce the total number of Boeing LRVs in existence to four, with only three of those in museums.
Posted by Frank Hicks at 2:15 PM No comments:

I happened upon information stating that Muni 1121, an ex-St. Louis Public Service PCC car, was cut up sometime within the last year or so. As such it's been removed from the PNAERC list. The car, shown above, was built in 1946 as SLPS 1713 and ran in that city until it was sold to San Francisco in 1957. There it ran into the early 1980s and, according to my scant records, was sold by Muni in 1988. I'm not sure to whom it was sold, but by the mid-2000s it had surfaced in the collection of Old Pueblo Trolley in Tucson, Arizona where it was kept at their East 18th Street storage yard amidst a collection of mostly buses. OPT had to vacate that location recently, though, and while most of their streetcars were moved to a new indoor facility in South Tucson, car 1121 was not an accessed part of their collection and was not worth moving. After several years of the car being available to other museums, with no takers, it was scrapped. It is not a significant historic loss, as there are a lot of these ex-SLPS 1700s still around including one that has been completely restored to original condition.
Posted by Frank Hicks at 10:19 PM No comments:

Thanks to Mike Dodge, who wrote to me to confirm that Lackawanna MU cars 4351 and 4359 (discussed here) have indeed been scrapped. I'm not sure exactly when they were cut up but it was likely a few years ago. Regardless, while they had been stored at the Reading Company Technical & Historical Society site in Hamburg, PA the cars were apparently actually owned by the Reading & Northern. The R&N owns a sizable fleet of these cars used in locomotive-hauled excursion service so this pair was presumably judged to be too far gone and stripped for parts. Needless to say, this is no great historic loss as a lot of these "high roof trailers" are still around. These two examples have now been removed from the PNAERC list and the RCT&HS is back to an all-Reading collection.
Posted by Frank Hicks at 3:33 PM 1 comment:

The Preserved North American Electric Railway Cars (PNAERC) list is a site which seeks to document all preserved electric railway equipment built for service on this continent. It is hosted by the Branford Electric Railway Association and maintained by Frank Hicks of the Illinois Railway Museum and Jeff Hakner of BERA.
Currently there are two versions of the list, the public site last updated in 2014 and "version 2.0" which is in beta-test mode and is being updated with changes and additions as they are submitted (link above). Once design work on the version 2.0 site is completed it will replace the current PNAERC site.
Note on photos: the largest portion of the beta test site that is still in progress is the photo/media link portion. Right now we are unable to fix, change, or update any photo links. We are aware that a large number of links are down but at the moment the mechanism to repair these is a work in progress.