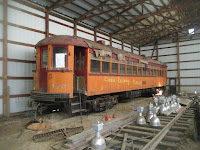 The Illinois Railway Museum has announced that it has acquired North Shore 172, a standard steel coach built by Cincinnati in 1920. This is the fourth-oldest North Shore coach in existence and the only one from that line's 1920 order for cars. IRM is the car's fourth owner; after the North Shore it was very briefly owned by the Hyman-Michaels scrap company but since mid-1963 it has been owned by an ex-North Shore employee. Since the late 1960s it has been stored in Noblesville at the Indiana Transportation Museum, where in the early 1970s it was one of two cars that inaugurated public operations at that site (the other car, CA&E 308, is also at IRM). It was operated regularly until about the early 1990s at which point its deteriorating condition saw it removed from public service. Since 2000 or so it has been stored in the barn at the ITM site as shown above.

The car was moved out of Noblesville in October (for photos and more info see our sister blog, Hicks Car Works) and has been at a temporary storage location in the interim. IRM's intention is to restore the car and operate it along with the museum's fleet of other North Shore cars. With the transfer of car 172 to IRM, there are only three electrics listed on the PNAERC roster under ITM ownership: the three derelict Lackawanna MU trailers stored on the siding in Cicero.
Posted by Frank Hicks at 1:15 PM

The Preserved North American Electric Railway Cars (PNAERC) list is a site which seeks to document all preserved electric railway equipment built for service on this continent. It is hosted by the Branford Electric Railway Association and maintained by Frank Hicks of the Illinois Railway Museum and Jeff Hakner of BERA.
Currently there are two versions of the list, the public site last updated in 2014 and "version 2.0" which is in beta-test mode and is being updated with changes and additions as they are submitted (link above). Once design work on the version 2.0 site is completed it will replace the current PNAERC site.
Note on photos: the largest portion of the beta test site that is still in progress is the photo/media link portion. Right now we are unable to fix, change, or update any photo links. We are aware that a large number of links are down but at the moment the mechanism to repair these is a work in progress.